Crocus Technology has developed and patented its innovative XtremeSense® TMR technology (Tunnel Magneto-Resistance) to provide superior magnetic sensing performance for use in many applications. The XtremeSense® TMR technology enables high magnetic sensitivity, stable performance over temperature, low noise and low power consumption which allows it to be used in a wide variety of end-products and markets. TMR sensors sometimes serve the same purpose as Hall Effect sensors but because TMR is based on different physics phenomena, work in a completely different manner which explains their superior characteristics as magnetic sensors. The magneto-resistance effect is the property of a device to change its electrical resistance value under the influence of an external magnetic field, therefore allowing the electrical detection of all kinds of magnetic fields in various applications.

At the heart of XtremeSense® TMR technology is a thin-film magneto-resistive device, the so-called Magnetic Tunnel Junction (MTJ). In its simplest form the MTJ consists of two electrically-conducting magnetic layers on either side of a thin (nanometer-scale) but highly robust insulating layer. One magnetic layer has a fixed magnetic moment direction while the other can change freely to follow the direction of the local magnetic field.

Despite how thin the insulating layer is, it should prevent any current flow between the two magnetic layers, according to classical physics. However, in this nano-world, quantum physics allows electrons to “tunnel” across the atoms of the thin insulating material, with a resistance that depends sensitively on the relative orientation of the two magnetic layers. Therefore, as the Free layer magnetization follows the direction and intensity of the ambient magnetic field, its magnetic orientation is modified with respect to the Reference layer. This change in relative magnetic orientation will significantly change the probability of quantum tunneling between the two layers and therefore the electron flow through the device.

Two clear states can be defined

One: Parallel state: the Free layer magnetization direction is pointing in the same direction as the Reference layer’s magnetization, this state allows current the flow through the MTJ.

Two: Anti-parallel state: the Free layer magnetization direction is pointing opposite the Reference layer’s magnetization; this state greatly limits the current flow through the MTJ. Between the two states lies a substantially linear region that on XtremeSense® TMR MTJs is very optimized to be used in Crocus Technology’s linear products. 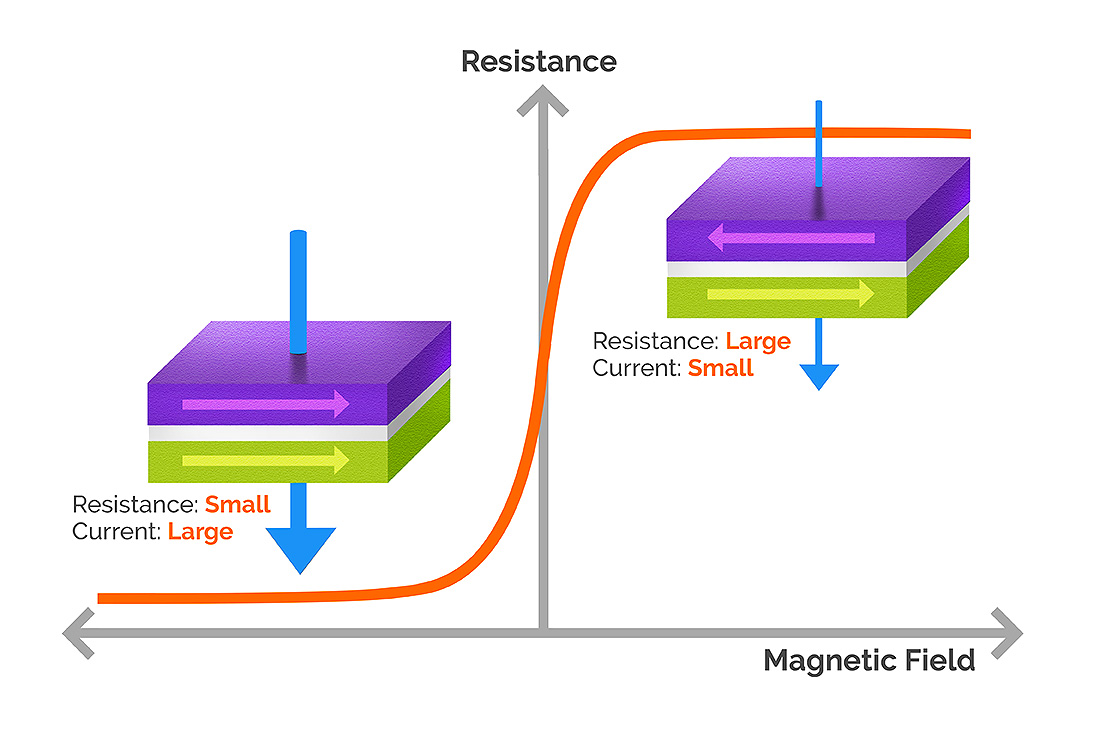 This variation in electrical resistance is then immediately detected and amplified to accurately sense the local magnetic field.

This feature, which is an implementation of quantum physics, makes the TMR sensor possible, with higher sensitivity, lower power consumption, and more stable characteristics.

XtremeSense® TMR provides the highest sensitivity, the lowest power consumption, and smallest size by comparison to the other magnetic technologies such as Hall, AMR, and GMR.

For more information about performance advantage of TMR over other magnetic sensing technologies, please read the application note AN117. 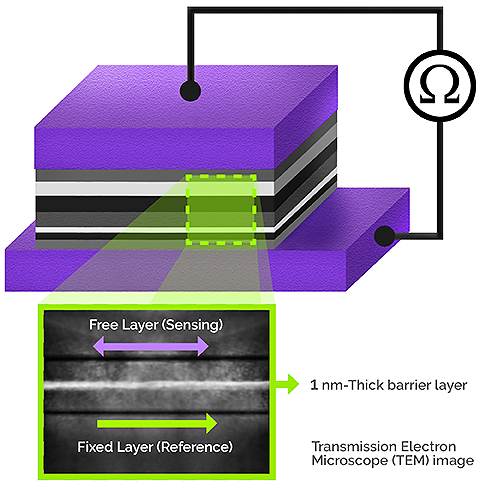 How XtremeSense® TMR Stacks Up

CrocusXtremeSense® TMR is the top notch of the TMR technology. Its sensors are monolithic, having the MTJ element integrated with the CMOS process. This allows a small die size, better costs, and better technical performance.

The reliability of the magnetic junction and the optimization of the CMOS design result in the superior performances of XtremeSense® sensors.

For more information about performance advantage of TMR over other magnetic sensing technologies, please read the application note AN117.